I started Masons Bulldozing in April 1998 just before my 19th birthday. The journey began based from our farm in the hills east of Tumut in an area called Adjungbilly, with a 1979 model Cat D5B dozer that was older than me and had 24000 hrs on it. It was an ex-Soil Conservation machine with a semi enclosed cab that meant you cooked in summer and froze in winter but it was all i could afford at the time and it got me started.

I began just doing Agriculture work for a few neighbours or any one that would give me a go. Still being mentored by Dad, Tony Mason who had spent many years on dozers both doing his own work on the farm and 10 years of contracting work which he mostly subbied direct to the Soil Conservation during there hey day of the 80’s and by all reports was a very tidy and particular operator.

As my client base expanded so did my desire for a machine with an air con cab and in winter of 2000 I bought an ex-Transgrid Case 1150E with a PAT blade and Air Con cab! From here i continued with the Ag work and started to get in with the NPWS as well. The early 2000’s saw saw us branch into our first excavator and float truck to keep up with all the dam cleaning and bush fires over summer.

In 2003 I married by beautiful wife Sascha Mason (formally Roche) and we also bought a Cat D8K dozer with a site prep contract working for Forests NSW. This was the beginning of our branching into forestry. Early the following year my father passed away and i was pretty down on the whole scene for awhile and contemplated giving the dozers away and going back to the farm. However I picked my self back up and the next opportunity rolled along.

In 2004 an opportunity to go into first rotation site prep work arose through an invitation from a friend, Jason Leahman from JL’s Dozer Hire. This saw us into our first hight track Cat, a D7H imported from Japan. This site prep work for Willmott Forests was part of MIS which exploded at the time and also lead to similar work with Gunns Forests and within 12 months had added a D7R, D8R, D85A-21 and D155-5 to the business and were rotating operators, running seven days a week for Willmott. During this work build up the business picked up Des Winnel as a dozer operator who fell in love with the D8R and to this day has not forgiven me for when i sold it, Des is still a big part of the business today and drives a D6TXL now.

This work continued for a couple of years and the business did its best to catch up with such a big growth spurt but adapted on the run, partially due to very fair treatment by the Willmotts operations manager, Gus Mchechren, who kept all contractors paid up to date. As the first rotation boom started to slow and innovation from another contractor saw the hectare rates starting to decline, we merged out of ripping working and using some connections made in the Forestry industry, were invited to negotiate a road maintenance program for Hume Forests. This lead to us purchasing their roading plant which consisted of a D8K and Backhoe which were a bit old and were sold and a JD 670 grader and Case 621 loader which was kept. The deal also came with Vern Walsh, a great old grader driver, who would help us build into a much larger roading fleet thru both Humes work and the other civil work we picked up as well.

Over the next few years the number of roading plant and trucks grew and the big dozers were traded for mid size machines settling on a D7R-11, D6RXL-111 and D6KXL as the line up for many years. Several trucks made there way into the fleet as well, which took me awhile to get my head around but thanks to plenty of coaching from one of great drivers James Doon we got there. Doony taught me a lot about trucks and guided us to settle on a Western Star 4800 and Kenworth T904 as our main trucks, the T904 i still have.

At the peak the business was running between 13-15 items of plant and trucks which in time came to be a bit much for one man to organise. As a result we went through a slight downsize in 2010 which allowed me to start driving the float full time and reminded me how much i liked being on the tools. From here all I could do was dream about driving machines again full time and not have the worry of organising a heap of workmen, whilst also trying to spend some more time with my young family.

So in early 2012 I began talks with Aaron Johnson from Mitchbrook. Over the course of six months we negotiated the sale of the civil side of the business, excluding the dozers, and on the 1st November 2012, Mitchbrook Masons was born and we reverted back to our original name of Masons Bulldozing Pty Ltd.

The business today consists of just myself and Des as the permanents, both driving a D6R-111 and D6TXL respectively and are helped out by the much experienced Vic McGuire during our busiest periods. The current make up has given me a much more even blend of family and work time while also allowing me to get back where I started … driving dozers! 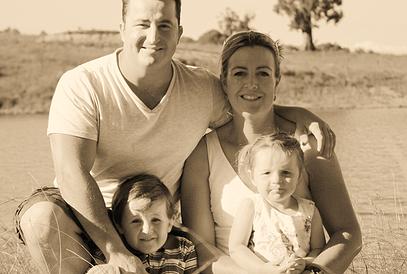